“We urgently need a detailed testing protocol for travel, agreed both at EU level and internationally” adds ACI EUROPE’s Jankovec

The European airport industry today applauds the European Commission (EC) for its proposed comprehensive coordination framework for travel restrictions. The industry’s trade body ACI EUROPE strongly urged all EU/Schengen States not only to urgently endorse this framework, but also adhere to it.
This EC proposal comes as ACI EUROPE is releasing fresh data showing that recovery in passenger traffic across the European airport network lost momentum in the second half of July before stalling in August – a result of the chaotic patchwork of travel restrictions reinstated by several States.
Newly released August passenger traffic data shows damage caused by chaotic restrictions
Passenger volumes at EU/Schengen and UK airports decreased by -71% in August, with that percentage going further down towards the end of the month in many markets1. The rest of Europe2 proved more resilient with passenger volumes decreasing by -59%.
Overall, Europe’s airports lost an additional -182.3 million passengers during the peak summer month (-69%) compared to a business-as-usual scenario, bringing the total loss in passenger traffic since January at -1.15 billion.
Olivier Jankovec, Director General of ACI EUROPE commented: “The current situation is clearly unsustainable for European aviation and tourism. Governments are telling us we need to adapt to the reality of COVID-19. If that means getting our kids back to school, there is no reason why it should not mean being able to travel in a way that is safe, and limits transmission risks. Many if not most of the current travel restrictions are not proportionate and not effective in combatting the epidemic. At the same time, they are heavily damaging livelihoods as well as EU citizens’ fundamental right to travel freely within the EU for business, pleasure or for family reasons. They need to be reconsidered urgently.” 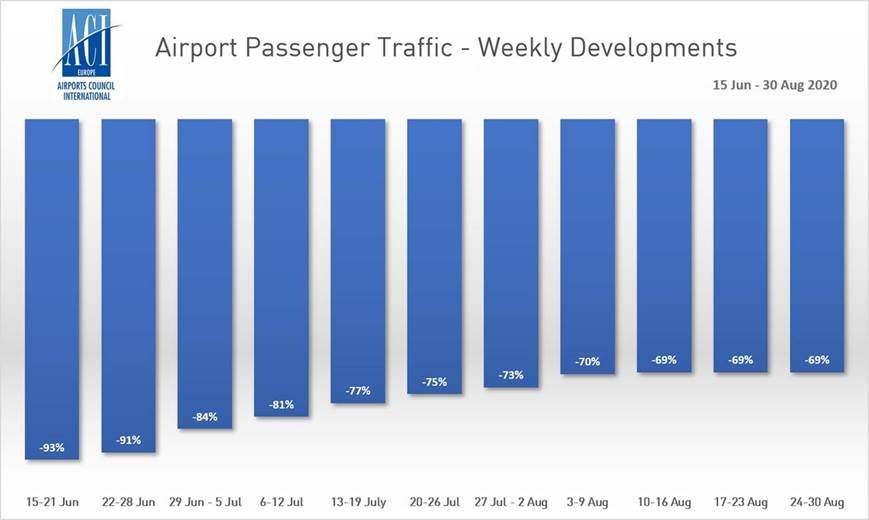 ACI EUROPE calls for an end to quarantine restrictions and a new, detailed testing protocol
ACI EUROPE called on European Governments to follow the position of the ECDC, which considers that travel restrictions are neither an effective nor efficient way of reducing COVID-19 transmissions in places where there is community transmission – which is the case across Europe.
At a minimum, and as specifically advised by the EC in its proposal, Jankovec urged Governments to abandon quarantine requirements for travellers coming from high risk areas and replace them by testing for COVID-19 infection, where needed: “The Commission proposal goes in the right direction by asking States to mutually recognise the results of tests carried out by certified health bodies. But we urgently need a detailed testing protocol for travel agreed both at EU level and internationally.”
Jankovec concluded: “Saving European tourism and aviation is not going to be done by selectively pouring billions into a few airlines. It will be done primarily by putting citizens and businesses in a position to travel again - so that all operators can look towards the path of recovery”.
Download