12 March 2018
Brussels - European airport trade association, ACI EUROPE today releases its traffic report for January 2018 – the first indication of air traffic performance in Europe for this year.
Average passenger traffic in geographical Europe grew by +7.4% during January, compared with the same period last year.
As in previous months, the non-EU market led the growth dynamic at +14.6%, on the back of Turkish airports increasing their passenger traffic by an impressive +28.1%. While Russian airports grew at a slower pace (+7.7%), airports in Georgia, Ukraine, Belarus, Moldova, Israel, Iceland as well as in the smaller markets of Albania, Bosnia Herzegovina, FYROM and Montenegro, all recorded double digit increases.
Passenger traffic growth in the EU market moderated to +5.2% when compared to 2017 (+7.7%). This mainly reflects the lasting impact of the bankruptcies of Air Berlin and Monarch, which resulted in traffic decreases at airports in Germany, Austria, Denmark and the UK – as well as the decision of Ryanair to take 25 aircraft out of its fleet this winter, to address crew rostering issues. The fact that January 2017 had seen a very strong increase (+10%) also contributed to the lower performance.
The Eastern part of the EU market continued to drive the growth dynamic, with airports in the Baltic States, Poland, Hungary, Slovakia, Slovenia, Croatia, and Bulgaria posting double digit increases – along with airports in Portugal, Malta, Luxemburg and Finland.
The Majors (top 5 European airports) saw passenger traffic growing by +9.3%. This performance was primarily influenced by a +30.3% increase at Istanbul-Atatürk, which propelled the airport to the second position amongst the league, behind London-Heathrow (+1.1%) and just above Paris-CDG (+4.9%). Amsterdam-Schiphol and Frankfurt also contributed to the performance of the top 5 - both increasing their passenger traffic by +7.6%.
Olivier Jankovec, Director General of ACI EUROPE said “If you put aside the persisting negative impact of last year’s airlines bankruptcies, 2018 is off to a good start for air traffic at Europe’s airports. The main driver for that is continued and robust economic expansion across our continent and beyond. While oil price volatility is more of concern in the medium-term, geopolitical tensions remain at the very top of our risk cards for the coming months.”
Freight traffic continued its recent upward trend during January at +8.4% replicating its growth rate this time last year. Aircraft movements were up +4.3% - increasing by +3.3% in the EU market and by +7.8% in the non-EU bloc.
During the month of January, airports welcoming more than 25 million passengers per year (Group 1), airports welcoming between 10 and 25 million passengers (Group 2), airports welcoming between 5 and 10 million passengers (Group 3) and airports welcoming less than 5 million passengers per year (Group 4) reported an average adjustment +6.8%, +6.6%, +8.3% and +10.1%.
The airports which reported the highest increases in passenger traffic during January 2018 (compared with January 2017) are as follows:
GROUP 1: Istanbul IST (+30.3%), Istanbul SAW (+25.3%), Lisbon (+15.2%), Antalya (+14.3%) and Moscow SVO (+12.6%)
GROUP 2: Ankara (+47.8%), Izmir (+20.8%), Budapest (+16.7%), Warsaw WAW (+16.4%) and Tel Aviv (+14.6%)
GROUP 3: Naples (+52%), Sevilla (+32.5%), Heraklion (+28.1%), Valencia (+27.9%) and Krakow (+20.1%)
GROUP 4: Foggia (+500%), Batumi (+110%), Varna (+107.7%), Craiova (+70.8%) and Kos (+61.1%)
The 'ACI EUROPE Airport Traffic Report – January 2018 includes 241 airports in total representing more than 88% of European air passenger traffic. ACI EUROPE Airport Traffic Reports are unique in that they are the only ones to include all types of airline passenger flights to, from and within Europe: full service, low cost, charter and others. 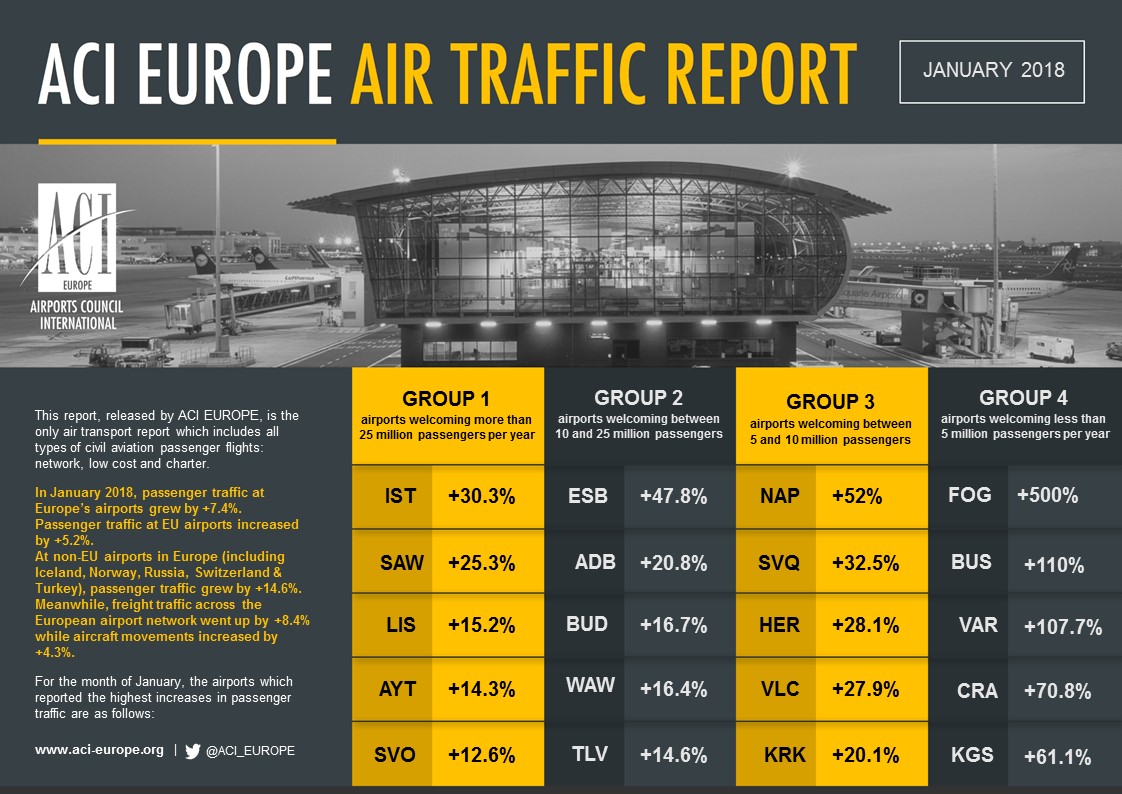