Olivier Jankovec, Director General of ACI EUROPE commented “These figures show that on the passenger side, demand for air transport keeps defying an increasingly challenging geopolitical and economic environment. But, the party could be ending soon. We are facing a Eurozone close to stagnation with business confidence now at a 4-year low, coupled with global growth losing momentum in a synchronised way and a slowdown in trade. While all of this is only taking its toll on freight traffic for now, there is no doubt that passenger demand levels are going to feel the effects at some point.”

He added “For EU airports, a no-deal Brexit is the most immediate risk. We are faced with the prospect of a capacity freeze on all UK-EU27 air routes, the modalities of which still need to be defined. If confirmed, UK airports would of course be the hardest hit, but many airports across the EU27 would also suffer – especially in Ireland and Spain, as well as smaller regional airports elsewhere that depend on UK traffic.”

In November, passenger volumes expanded by an impressive +6.7% at EU airports, with the pace of growth having increased every month since last July (from +4.3%).

Airports in Austria, Greece, Malta, Luxembourg and most of the Eastern countries of the EU bloc posted double-digit growth in passenger traffic – with German, Italian, Spanish, Irish and Cypriot airports also outpacing the EU average. At the other end of the spectrum, airports in Sweden kept losing passenger traffic (-1.6%) - partly due to the national aviation tax - along with Slovenia (-3.6%).

Meanwhile, passenger growth at non-EU airports stood at +5.3% in November – their weakest monthly performance since January 2018.

Passenger traffic growth at the Majors (top 5 European airports) moderated at +3.6% in November compared to the previous month (+4.2%). This mainly reflected timid growth at Istanbul-Atatürk (+1.2%) and Amsterdam-Schiphol (+2.4%). Paris-CDG (+6.4%) posted the strongest performance, followed by Frankfurt (+4.7%) and London-Heathrow (+3.2%).

The airports that reported the highest increases in passenger traffic during November 2018 (compared with November 2017) are as follows:

The ACI EUROPE Airport Traffic Report - November 2018 includes 245 airports in total representing more than 88% of European air passenger traffic. The report is unique in that it is the only one to include all types of airline passenger flights to, from and within Europe: full service, low cost, charter and others. 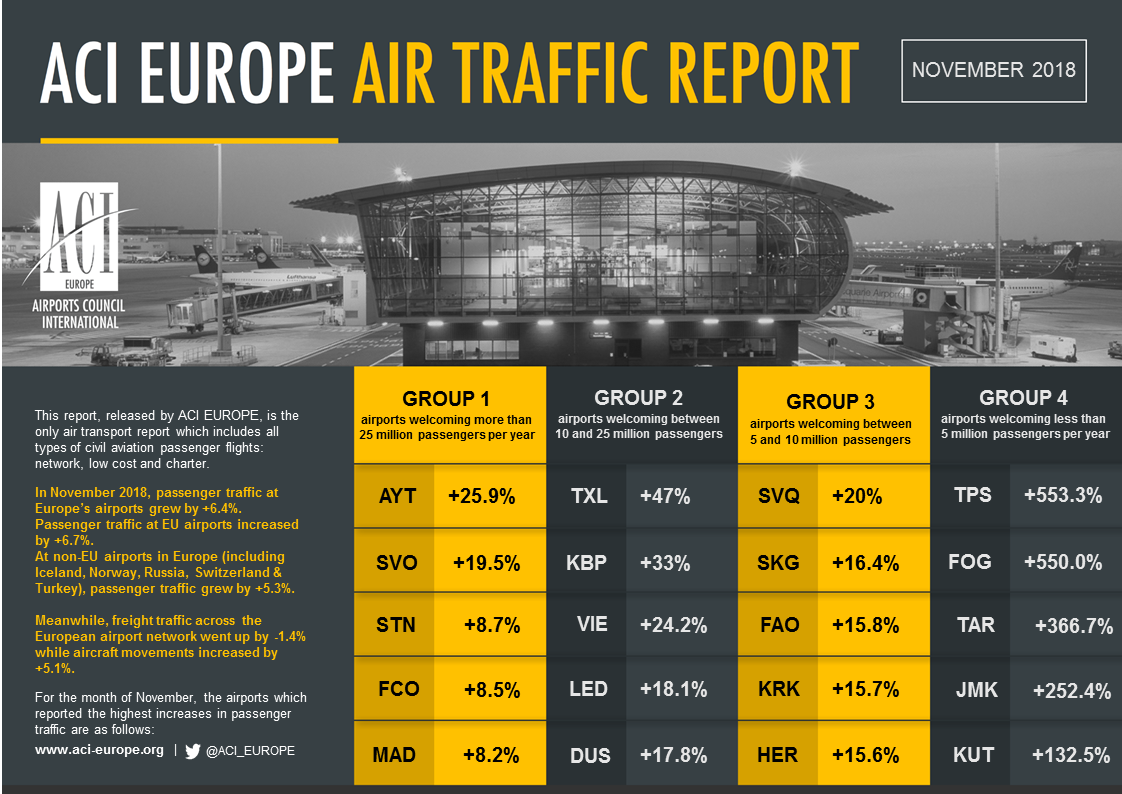