What is exactly air connectivity? How can it be measured? And how well connected is Europe?

ACI EUROPE - in partnership with SEO Amsterdam Economics - has published Airport Industry Connectivity Report 2022 with the findings documenting the ongoing effects of the recovery after COVID-19 crisis on Air Connectivity.

Published yearly since 2014, these reports do not measure passenger volumes but the extent to which Europe’s airports and their communities are connected to and accessible from the rest of our continent and the world – using a set of direct, indirect and hub connectivity indexes.

This year’s report shows how the recovery is now proceeding, as vaccination within Europe is widespread and epidemiological risks have considerably reduced. However, as we are learning to live with the virus and economies have re-opened, air connectivity is taking time to come back. Its recovery is far from uniform, with significant differences between the lead indexes of air connectivity - direct, indirect and hub connectivity, as well as between geographical markets and segments within the airport industry.

(Find out more about the individual connectivity scores of airports in the Annexes to the Report.)

Using the SEO NetScan connectivity model, the report provides indexes for direct, indirect and hub connectivity based on both quantitative and qualitative metrics. The airport connectivity index is made-up of both direct and indirect weekly frequencies, weighted by their quality. This means that this is not simply a measure of how many city pairs there are, or how many direct services there are. For the purposes of this report, connectivity is a composite measure of the number of destinations, the frequency of services and the quality of the connections (in the case of hubbing or indirect services). Let’s begin by outlining the various types of air connectivity that airports facilitate. The following 4 definitions describe them and together they provide a qualitative and quantitative picture of how an airport links to the rest of the world.

Direct connectivity: These are the direct air services available from the airport – measured not just in terms of destinations, but also factoring in the frequency of flights to the same destination (so for example, an airport with 5 daily flights to another airport, will register a higher score than one with only 4).

Indirect connectivity: This measures the number of places people can fly to, through a connecting flight at hub airports from a particular airport. For example, if you fly from Cork to a hub airport such as Amsterdam Schiphol, that’s a direct flight from to A to B. But with the vast choice of onward destinations you can fly to from there – the large number of available onward connections from these airports expands the range of destinations available from the airport of origin. Indirect connections are weighted according to their quality, based on connecting time and detour involved with the indirect routing. For example, a flight from Manchester to Johannesburg via Paris-Charles de Gaulle will register a higher score than an alternative routing via Doha.

Hub airports bring the virtues of air transport networks. For an airport that has a wave of 10 flights leaving at 9 am, one additional flight arriving at 8 am increases its hub connectivity score by 10, reflective of the onward connecting options for passengers on that additional arriving flight. 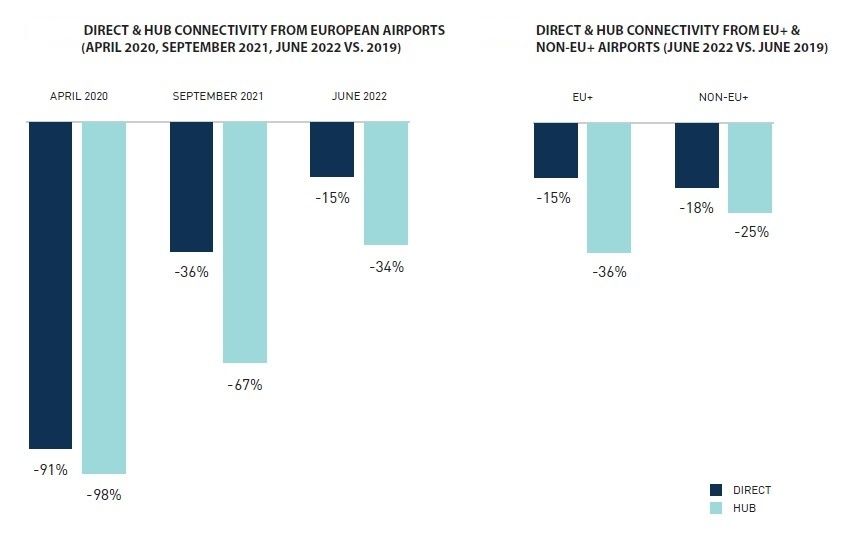 More than 2 years into the COVID-19 pandemic — and despite a dynamic air traffic recovery finally taking hold thanks to the lifting of travel restrictions by many countries since early spring 2022 — air connectivity across the European airport network still remains -29% below 2019 levels.

This means as of June 2022, air connectivity in Europe is still back to where it was back in 2009 — when the Great Recession hit.

The re-opening of the transatlantic market in November 2021 and the progressive lifting of travel restrictions within Europe and easing of these restrictions on many other intercontinental markets has finally allowed hub connectivity to start recovering.

However, Europe’s hub connectivity still remains -34% below pre-pandemic (2019) levels — predominantly due to the slow recovery of direct connectivity to Asia-Pacific, as well as the connectivity losses of Russian airports as a result of international sanctions.

While direct connectivity is finally getting closer to pre-pandemic levels at -15%, indirect connectivity stands much behind at -36%. This reflects the distinctive patterns of the recovery in air traffic — which has been driven by leisure/VFR demand and fueled by ultra-LCCs capacity expansion, and with travel restrictions remaining in place on many intercontinental markets. 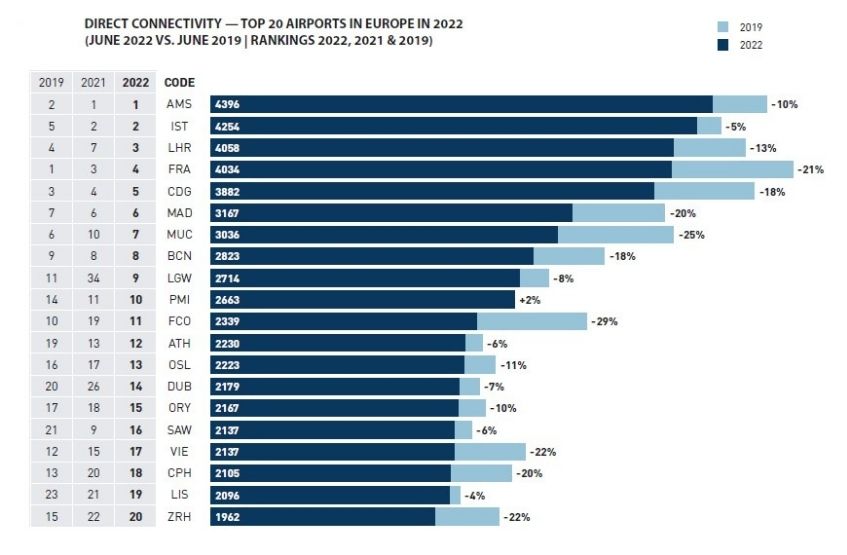 * Unless stated otherwise, all data reported below is compared to pre-pandemic (2019) levels.

Amsterdam-Schiphol (-10%) this year again holds the top spot in terms of direct connectivity. The airport has been the top performer throughout the pandemic, helped by a diversified airline portfolio combining a strong based network airline and a significant presence of LCCs and leisure airlines.

The Dutch hub is followed by ever-resilient Istanbul (-5%) holding on to 2nd position again this year, and London-Heathrow (-13%) moving up to the 3rd position from the 7th.

Palma de Mallorca (+2%) is the only airport in the top 20 league which has fully recovered and even exceeded its pre-pandemic direct connectivity. This is again a reflection of a recovery largely driven by leisure demand and intra-European traffic.

Together with Istanbul, Lisbon (-4%), Athens (-6%) and Istanbul-Sabiha Gökçen (-6%) have almost recovered their pre-pandemic direct connectivity. London-Gatwick (-8%) and Dublin (-7%) are also coming close, having rejoined the top 20 league after dropping off last year.

Conversely, Rome-Fiumicino (-29%) is lagging behind - a result of the demise of Alitalia, now replaced by a much downsized ITA Airways, along with the Lufthansa Group hubs of Munich (-25%), Vienna (-22%) and Zurich (-22%). 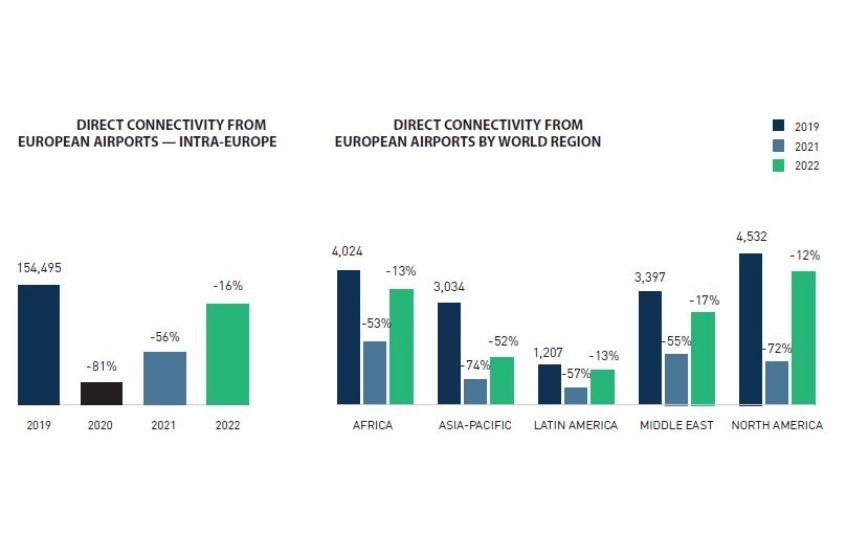 But direct connectivity to Asia-Pacific (-52%) still remains less than half of what it used to be — predominantly due to the permanence of tight travel restrictions to China and other Northern Asian markets.

The re-opening of the transatlantic market in November 2021 and the progressive lifting of travel restrictions within Europe and easing of these restrictions on many other intercontinental markets has finally allowed hub connectivity to start recovering.

However, Europe’s hub connectivity still remains -34% below pre-pandemic (2019) levels — predominantly due to the slow recovery of direct connectivity to Asia-Pacific, as well as the connectivity losses of Russian airports as a result of international sanctions. 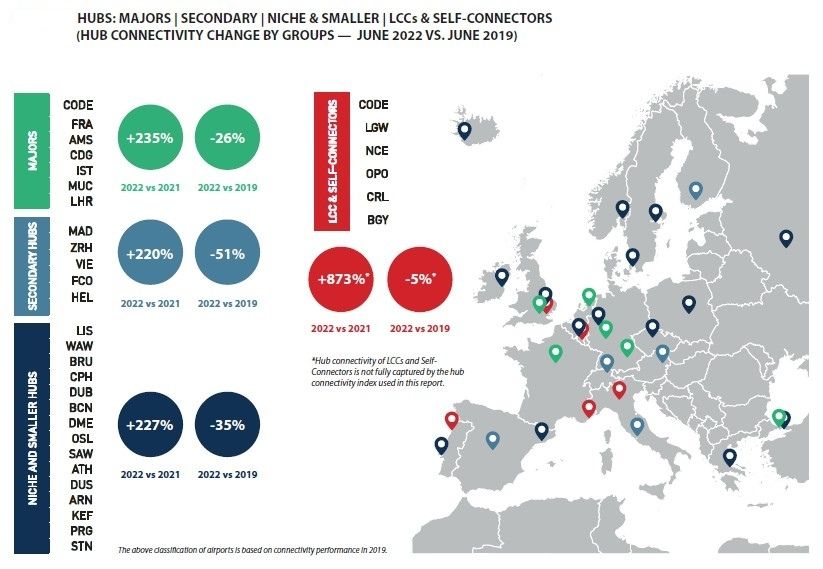 Major hubs (-26%) showed significantly more resilience than both secondary hubs (-51%) and niche & small hubs (-35%) — thanks to the critical mass of their based network airlines and their diversified route network.

Amongst European hubs, LCC & Self connectors (-5%) have experienced the lowest decrease in hub connectivity compared to their pre-pandemic (2019) levels — although from a very low base (i.e. their aggregate level of hub connectivity has been rather marginal — at 1% of the hub connectivity offered by the major hubs). Nevertheless, it is worth noting that Brussels-Charleroi (+79%) and Milan-Bergamo (+38%) both significantly increased their hub connectivity levels compared to 2019.

While Athens (+1%) has also recovered its pre-pandemic hub connectivity and Dublin (-25%) benefitted from its reliance on the re-opened transatlantic market, most other niche & small hubs remain below 60% of their 2019 hub connectivity levels. The most extreme cases are Prague (-83%), Dusseldorf (-81%) and Moscow-Domodedovo (-76%).